Not quite what was expected 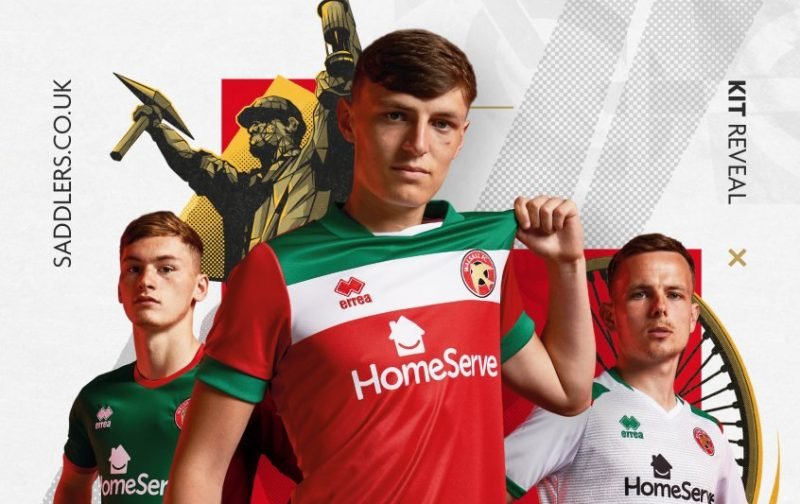 Today was the long awaited kit reveal, for the new home and away shirts. There was much anticipation, especially after the commemorative third kit went down extremely well weeks ago. The response has been mixed, and the fans are divided over both kits, which are quite unique designs.

Throughout the week, Walsall had teased images from both the home and away kit, and even at this point, the fans were slightly divided in their opinions of the kit. The launch came early this morning, with the home being the same colour scheme as the season just gone, but with a green, then white stripe before the historic red. The away, was the same green, but all over, with some white dots making up a pattern at the bottom.

Both are very different designs, and after the commemorative third kit, not what was expected. The third kit is quite traditional, which is what many expected to be the theme of the season.

The goalkeepers kit is the same as the away kit, which was a surprise to see the same design. Other colours will be available for the keepers, but the design will remain the same.

It has been mixed to say the least. On a poll over on Vital’s twitter, only 37.9% of fans loved both kits, with a fair portion, 17.1%, said that they did not like either kit. This is quite a sizeable amount of people who more than likely, will not be buying any of the kits.

Some fans liked only one of the kits. The home went down better, with 25.6% liking the home kit, but not liking the away. On the flip side, 19.4% of the Saddlers faithful liked the away, but not the home. Once again, it is a concerning figure, not only for the club on a sales front, but from a fan bond front. Every club wants to see their fans taking pride in the team, kit, and club as a whole. The fact that one of these is not filling the fans with pride is not great.

One fan was neither loving, or hating the kits, but did not like the green theme:

Wouldn’t say I hate it… but I’m not keen! Don’t get this obsession with the green, just stick to green socks to be different if they insist… personally prefer the Red White & Black combo

The kits have started growing on one fan, who likes the third kit, and admitted the home is slowing winning him over:

The 3rd kit with the supporters names is absolutely spot on from the club well done all round. The away shirt I like its different and I personally like it. Maybe the GK tops could of been styled slightly differently but still good. The home kit at 1st I was like no but it a yes.
@LeeReyn46555467

Personal View
Initially, I was extremely surprised with the curveball designs of the home and away. Both are growing on me the more I look at them. My personal favourite is the third kit, and that is not just because it is the commemorative kit. It is stylish, and looks slick. The home kit took me by surprise, especially keeping the green trims on it. Personally, I would have liked less green and more red with white, especially with the away being all green.
The away kit is the big surprise for me. Firstly I didn’t expect the colour to be what it was, but more than that, I didn’t expect spots. The spots do look a little bit too ‘EFL Logo’, however the more I look at it, the more I am liking it.
Kits will always divide opinion, but the club have gone for something a bit different, which cannot be criticised. Until we see the team playing in them, it will be tough to give a final opinion, but so far, it has been a real mixed bag of responses.
Photo credit – Walsall FC