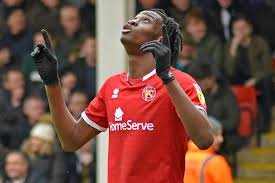 It was the start we all wanted, 3 points on the board, and signs that this crop of players can be a very good League Two team. So here are a few post match thoughts.

Firstly, I felt we looked organised. The players knew their roles, and when we defended there weren’t the gaps that would appear last season. Going forward, we created some great opportunities, and although there are criticisms that they weren’t taken, the chances were there. The creativity and goals in the team is something we all were slightly worried about, as we aren’t the most prolific unit, however if we can keep up the level of good chances created, throughout the season, then I have no concerns.

We looked organised at set-pieces too. Defensively, nothing springs to mind as being a concern, however Grimsby were a shorter team than was expected, however we dealt with the threat in-front of us. Attacking set-pieces, we didn’t look bad at all. Lavery met a corner well, and was unlucky to see it cleared off the line. We look like we have worked on a few routines too, which is something that makes other team think twice when setting up to defend against us.

I didn’t feel that any players had a bad game. Robbo collected some crosses, and was quite dominant at collecting them too. He made a couple of saves, but in truth, he wasn’t really tested. That is credit to the defence. Norman had a great game, putting his body on the line, and of course, grabbing himself an assist. Clarke and Scarr looked resolute against a strong player in Matt Green, who only go the better of them once. CCM looked good too. He tired as the game went on, but after a lot of time without football, after his injury in January, he will still be shaking off that rustiness.

Bates and Kins seem to have a growing relationship in the middle. They look like they are vying to make that midfield two theirs, and will be doing their best to keep Guthrie and Sinclair out of the team.

Gordon looked a little quiet out wide, however he looks threatening and ready to pounce whenever he can. Wes did lose the ball needlessly at times, where he opted to keep running rather than look to pass the ball, however this is his game, and it is to be expected when he does constantly run at defences. Holden, and then Osadebe who replaced him, are really shining in the No10 role. Holden’s ability to turn on the ball, and pick out a pass to keep the play moving forward is key. Osadebe is a different No10, but the way he controlled the ball, and ran with it, shows promise and potential, for a player that has only trained a handful of times since January. Up top, Adebayo looks like a fox in the box. His goal wasn’t a glamorous one, but he seems to have picked up where he left off last time out, being in the right place at the right time.

So there we have it, it wasn’t perfect, but it was a great first performance, and a great starting point for the season ahead!