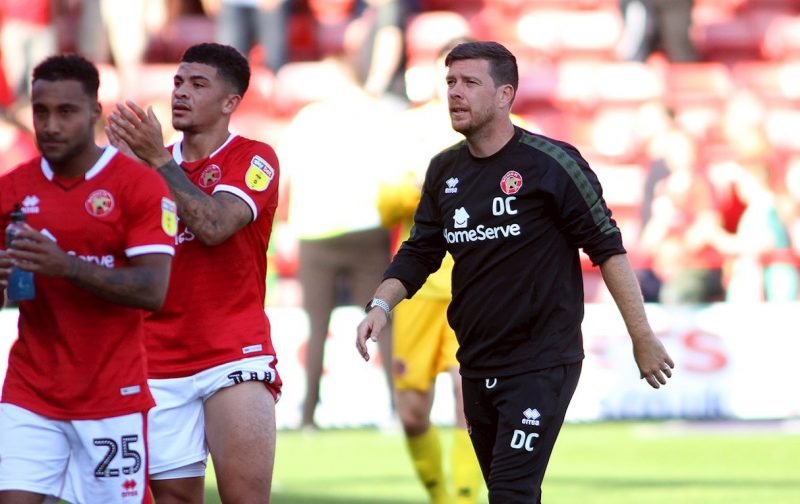 We are only 2 games in to 2020, but Walsall have already shown that they have a resilience about them, and that they can grind a result out, where as before, we may have faltered.

The game against Leyton Orient wasn’t pretty, it felt like a slog, and we didn’t look overly threatening going forward. Some resolute defending, few clear cut chances for Orient, and a smart finish from Gordon proved to decide the game. It was a welcome relief after a poor showing against Carlisle.

Against Salford, we looked a better team. More solid defending, and we passed the ball better, and battled up top to score 2 goals. We managed to really limit a strong attacking team from having a lot of chances.

So what do I think has changed? We have gone back to fighting each match. We have got a real sense of bodies on the line, and scrapping for every point. Clarke has often spoken about mental strength of his players. We have seen two games that shows just that.

Lavery and Gordon work hard together up front. Their pressing has created a few chances in the last couple of games, late against Orient, Gordon forced a chance to nearly double our lead, and against Salford, Lavery could (should) have been awarded a penalty for doing the same. But this pressing, and energy is something that the whole team is displaying, despite a tough run of games without any break longer than about 3 days.

Bates and Kinsella have battled well in the last two games. Both games, they were playing against taller, and more physical players, however both fought, scrapped and put their bodies on the line for the team. They also won their fair share of headers when, lets face it, they aren’t the tallest.

Another player who has shone so far in 2020 is Cameron Norman. What a couple of games he has had. He came on as a first half sub for Facey, who had to be replaced with a knock. Norman played very well that game, he was solid, put in some good tackles, and got forward to support Holden. Then against Salford, he had to move over to Left-Back when Cockerill-Mollett had to be replaced through injury. He once again had a very good game and handled himself well out of position. Before the last two games, I would have had to admit, Facey would have been my first choice Right-Back. But after his performances recently, Norman and Facey, have a fight for the first team on their hands.

Finally, Liam Roberts has had 2 good games since a disaster against Calisle. Against Salford, he made 2 fantastic saves to keep us in the lead. His kicking also improved, and he commanded his area well. His mental strength after Carlisle has been amazing, and we all want him to succeed.

It would appear that Clarke has finally got his players playing the way he wants. It may have taken longer than we would have liked, but we now see a team that will battle. There is still a lot to play for this season, we are in the 3rd round of the leasing.com trophy (a cup is still a cup) and we now have a small, tiny, cheeky eye on how those play-offs look. Maybe it will be too late this season, but we have a team that could well be competing next season.